The war in Ukraine has exposed the fault lines in India’s policy of strategic ambivalence between Russia and the West, writes John McCarthy.

India’s approach to the invasion of the Ukraine impacts on its standing as a major power.

For most nations, taking positions on the Ukraine war has been reasonably straightforward – even if the precise policies deriving from that alignment have been less so.

It became clear where NATO would stand once the remnants of Germany’s more flexible policy towards Russia were put on ice. Russia’s small band of fellow travellers were only ever going to tip their lids in one direction.

China has been Russia’s worried second, embarrassed both by the latter’s ferocity and poor actual performance in the ring – but China still wants the West to continue to spend its political energy in Europe, not in Asia.

Much of the rest of the world has a policy of saying how shocking it all is without doing much about it.

However, while India’s policy of strategic autonomy — allowing it latitude outside the rigour of alliances — gives it a certain freedom of choice, that freedom still has encumbrances. India can with justification claim it has never been anyone’s patsy.

After Independence, it straddled the Cold War seesaw with some success – arguably tilting slightly towards the Soviet Union. Its true security concerns were with Pakistan and China.

With the end of the Cold War, India recognised the authority of the United States in its unipolar moment, and that over the longer-term successful management of the security threat posed to India by China depended on its relationship with America. India also understood that to break free of its statist economic system, it needed to embrace the West.

The means of putting India’s American relationship into a positive state of repair was the India-United States Civil Nuclear Agreement — or the Nuclear Deal — concluded in 2008. The Deal bestowed on India the de facto rights and obligations of a nuclear power. Although its text focused on nuclear issues, a major import of the Deal was that it opened the door for India’s admission to the major powers’ prime time club.

India’s relationship with Russia remained stable. Russia continued to have a balancing role in India’s surrounds, particularly in West Asia and Central Asia. It supplied many of India’s armaments needs. Moreover, even in the interest driven world of international relations, longstanding loyalties retained relevance.

While in recent years the American-Russian relationship has been bad, some Indian strategic ambivalence was manageable. But with the Ukraine crisis, it no longer works.

India will suffer from the impact of global sanctions on Russia. For example, it relies on imports for 85 percent of its oil needs. While it is securing additional supplies from Russia at a discount, the crisis has boosted the cost of oil from alternative producers (as well as of grains and other commodities such as sunflower oil) – with implications for Indian inflation and forex targets.

India also risks penalties for avoiding sanctions on Russia. Over 50 percent of its weapons supplies still come from Russia. The United States has thus far avoided penalising India under its 2017 Countering American Adversaries Through Sanctions Act (CAATSA), for purchases and maintenance of Russian surface-to-air systems. But it might not now feel able to be so forgiving, particularly if the Indians continue to explore rouble-rupee exchange mechanisms such as those used in the Cold War, and which would bypass Western forex sanctions systems.

But more importantly, by avoiding direct criticism of Russia over Ukraine and abstaining on key UN votes, India put itself at odds with the West many others. In declining to take direct issue with Russia’s invasion of a neighbouring country, Indian policy is glaringly at odds with its understandably strong and stated aversion to Chinese incursions into its territory in the Himalayas. 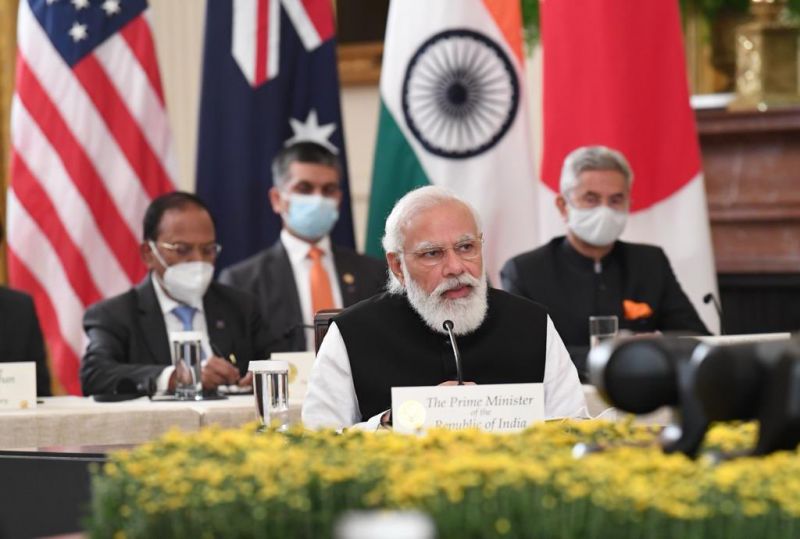 The Quad may still be a ramshackle inhibitor of Chinese influence and adventurism in the region, but it has at least helped shape some common approaches amongst its members and is worth retaining in working order. If one member is at odds with others on an important issue — even an extra regional one — the interests of all will suffer.

If, in the shadow of Ukraine, India continues to retreat into a swamp of ambiguity, the respect in which it has been held, and its status as a positive regional force, will diminish.

Since the turn of the century, a number of regional countries — and not just the United States, Japan and Australia — have placed increasing significance on the regional role of India and on their relations with her.

In recent years, major European powers have also seen India as central to their evolving Indo-Pacific strategies. Since the advent of Mr Modi, a certain fragility has nonetheless developed in the ideological affinity between the liberal democracies and India. That fragility can only become more acute if India finds itself in a markedly different lane on a European war of enormous strategic importance and emotional intensity to countries, some of whom have critical strategic dealings with New Delhi in the Indo-Pacific.

It is in India’s interests and in those of its friends, that, on Ukraine, it put its ambiguity behind it. If it does not, it will place in jeopardy some of the better policies of American, Japanese and other regional countries to manage the rise of China – to say nothing of its own efforts to this end.

John McCarthy AO is a Senior Adviser to Asialink, a member of the Board of the Australia-India Institute, and Vice-Chancellor's fellow at Melbourne University. He is former ambassador to the US and high commissioner to India.

A version of this article originally appeared on The Australian Financial Review on March 23, 2022.