Myanmar's generals have been shaken by a string of defections from the security forces, but this does not spell the end of the military regime. Andrew Selth argues it would take the defection of high-ranked officers and major combat units to seriously weaken the junta's grip on power.

When Myanmar’s generals seized power on 1 February, sparking an immediate and massive public reaction, it soon became clear the coup would severely test the cohesion and loyalty of the country’s security forces. This was a critical issue as, lacking any popular mandate, the junta depended entirely on coercion and intimidation to enforce its will over the civilian population. Nine months later, it is worth looking at this subject again, for three reasons.

One reason is the continued opposition to the military regime, including from a wide variety of armed groups. Another is the increasing trickle of defections from the armed forces (or Tatmadaw) and Myanmar Police Force (MPF) to the resistance movement. The third reason is a recent report that a senior army officer in a critical command position was arrested for planning to defect to one of the country’s ethnic armed organisations (EAO).

As always, developments in Myanmar are difficult to determine with any confidence. However, some trends are apparent, raising questions about the future of the junta, which now calls itself a ‘caretaker government’.

As far as can be judged, the defectors’ backgrounds vary widely. Most of those from the Tatmadaw seem to be young, unmarried members of the rank and file. However, about 100 officers have reportedly defected, ranging from lieutenants through to majors. Reports of a defecting colonel have not been verified. Most have come from the army, but it appears that about 80 defectors have come from the air force, and a small number from the navy. Not all have been from combat units.

Defectors from the MPF seem to have come mainly from those civil branches imbued with the police force’s relatively new ethos of ‘community policing’, although at least one Special Branch officer has crossed over. Others have been policemen and women recruited for service in their home districts, as part of a move by the MPF to capitalise on local knowledge and the ability to speak local languages. There have apparently been no defections from any of the MPF’s paramilitary security battalions. 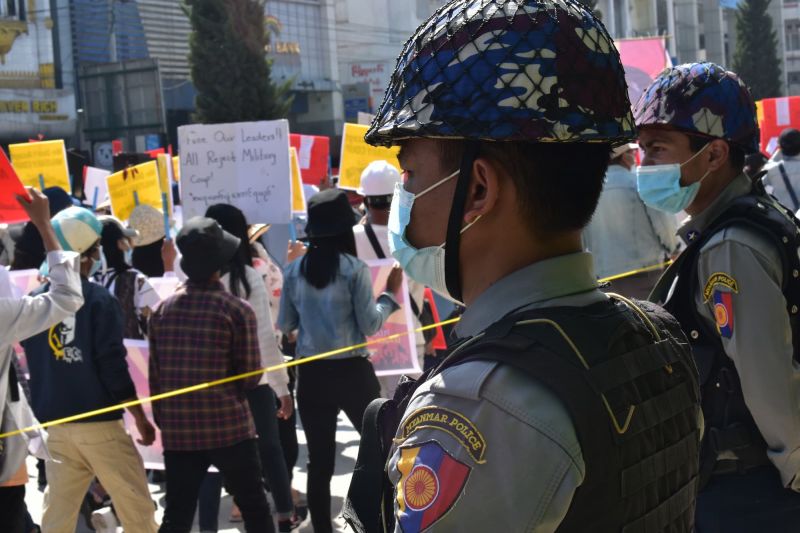 If activist reports can be believed, the overall rate of defections is gradually increasing. One defector has stated that between five and ten members of the Tatmadaw join the CDM’s ranks daily, but the basis for this remarkable claim is not clear.

The reasons put forward for these defections also vary. Some appear to have been in response to calls from the shadow National Unity Government (NUG) for military and police personnel to join the civil disobedience movement. Others have been the result, in part at least, of financial inducements. A number of people seem to have defected (or perhaps deserted) due to personal grievances and general disillusionment with life in uniform.

Most defections, however, reflect strong opposition to the military coup, anger at the armed forces leadership, and an unwillingness to use lethal force against members of the public.

It has been claimed (without evidence) that up to three quarters of the Tatmadaw oppose the coup. It has also been reported that many servicemen and women would like to defect, but fear to do so. They are worried about the consequences of taking such a drastic step, which would mean the loss of benefits and privileges, and expose their families to harsh retribution. Also, the collapse of Myanmar’s economy and civil society, and the COVID-19 pandemic, have persuaded them that they are better off where they are, at least for now.

Defections and desertions from Myanmar’s security forces are not new. They usually have occurred after major outbreaks of civil unrest. However, the current level of separations is unprecedented. It has brought to the fore a host of long-standing grievances and raised questions about the morale and loyalty of both the Tatmadaw and MPF. A few observers have even suggested that continued defections could bring down the junta.

A senior NUG figure has claimed that up to three percent of the Tatmadaw’s personnel have already defected or deserted, and that if as little as 0.4 percent more should leave it would “necessarily lead to the institutional collapse of the military as a domino effect”. However, as Ye Myo Hein of the Wilson Centre has pointed out, that would mean that up to 10,000 had already defected, which is most unlikely. Also, there are no grounds for thinking that the defection of 3.4 percent of the Tatmadaw would automatically lead to its collapse.

Even so, the current rate of defections seems to have shaken the generals. Defectors are being hunted down, the surveillance of military and police personnel has increased and propaganda campaigns are being ramped up. For its part, the CDM uses social media to celebrate defections, which boost the morale of the anti-junta forces. Also, some defectors have skills that can be passed on to civilians wanting to join the fight against the junta. Several former soldiers are training members of the PDF in the handling of weapons and explosives.

All that said, a few thousand defectors will not significantly weaken the approximately 400,000-strong security forces, or threaten the junta’s survival. It would take the defection of high-ranked officers and major combat units to do that. It is in this context that the reported arrest of a Regional Military Commander (RMC) is so interesting. RMCs are usually brigadiers or major generals, and are the lowest ranking officers that can exercise independent command over major combat units. They are thus key actors in the junta’s control of the country.

According to The Irrawaddy magazine, Brigadier General Phyo Thant, the commander of North Western Command, which includes Chin State and Sagaing Region, was recently relieved of his position for planning to defect to an EAO with some of his officers. Rumour has it that he has already been tortured to death. If the story is true, his arrest would be a dramatic development with far-reaching implications. However, observers need to be wary about accepting this report at face value, for several reasons.

First, the source of the story is apparently ethnic insurgents, who have a long record of trying to sow discord among the armed forces and civilian population, and who clearly have an interest in spreading such rumours.

Second, there are several precedents for the removal of senior military officers who have been unsuccessful in managing serious security threats. This occurred in 2018, for example, when a series of costly military defeats in Western Command saw the RMC there replaced. Since the February coup, North Western Command has seen bitter fighting, insurgent victories and mounting casualties, doubtless prompting concern at Tatmadaw headquarters.

Third, according to the Irrawaddy story, the Brigadier planned to defect with a group of senior officers. It also said that he delayed doing so because he wished to get more people to join him. This does not ring true. All senior officers are watched closely by the intelligence services, and it would be very difficult to keep plans for a mass defection secret. The more people involved, the more likely the plan would leak.

Fourth, if a senior military officer and some of his subordinates were to defect, it is unlikely that it would be to an insurgent group against which the Tatmadaw had been fighting, in some cases, for decades. Feelings between them run deep. It is more likely that the defectors would seek refuge with the NUG, the shadow administration that includes several elected politicians and claims to represent all forces currently opposed to the junta.

Fifth, because they occupy critical positions and potentially exercise such power, RMCs are carefully selected for their loyalty to the Tatmadaw. Indeed, it is possible that Pho Thant was hand-picked for his appointment by the Commander-in-Chief, Senior General Min Aung Hlaing. This would not save him from demotion for a perceived failure to perform, but it argues for caution in believing stories about his possible defection to enemy forces.

Like so many other developments in Myanmar, the true story behind Brigadier Pho Thant’s reported removal from office may never be known. The appointment and replacement of key personnel are rarely explained. Also, it would not suit the regime to admit that any member of the senior officer corps had doubts about the Tatmadaw’s current policies, or its leadership.

The continuing trickle of defections is doubtless of concern to the military hierarchy. Unless something completely unforeseen happens, however, it is unlikely significantly to weaken the junta’s grip on power. Indeed, when threatened the generals’ default position has not been to reconsider their brutal policies, but to crack down even harder on any signs of dissent. The replacement of Pho Thant with a notorious hard-liner seems to be further evidence of this.

Such an approach will only fuel the unfolding tragedy in Myanmar, and add to the suffering of its people at the hands of the security forces. It will also encourage more desertions.