When the coronavirus pandemic passes, Asia is set to continue its great long boom. Building on the theme of the recent Asialink Business ‘Winning in Asia’ report, respected economist Peter McCawley argues Australian government and business needs to more deeply engage with Asia’s growing regionalism, avoid a post-pandemic temptation to isolate, and embrace greater openness to two-way capital flows, to technology, and to international knowledge.

Coronavirus has already cast a long shadow over the Australian economy. But this is only the beginning. There is probably worse to come. What about the damage to Australia’s economic links overseas? What is the damage, for example, to Australia’s links with Asia?

Australia has long thrived on trade and investment ties with countries such as China, Japan, and South Korea. And a much-publicised Indonesia-Australia Comprehensive Economic Partnership Agreement (IA-CEPA) has just come into force. According to Trade Minister Simon Birmingham, IA-CEPA is “the most comprehensive bilateral trade agreement Indonesia has ever signed.”

So where do Australia’s economic relationships with these and other Asian countries stand now as coronavirus extends its deadly reach? What might be done to limit the damage that coronavirus threatens to bring to Australia’s links with Asia?

The truth is that the outlook is bleak. A mood of protectionism stalks the world. The current environment for working with our Asian neighbours is suddenly more difficult than at any other time since World War Two, over 70 years ago. We have been so absorbed with coping with the crisis at home that we have hardly begun to consider the implications for our overseas economic relations. But if Australia’s economic policies become inward-looking, and if we fall into the trap of protectionism, we will pay the price for decades to come. One problem is walls. The economic walls that have been erected since coronavirus emerged as a threat earlier this year are remarkable. Even within Australia, individual states are threatening to establish localised economies. And externally, Australia is cut off from the world as never before. We can hardly hope to strengthen economic links with our Asian neighbours while these walls remain.

To make matters worse, the walls are not new. They have been going up for some time. As just one example, successive Australian governments—both Liberal and Labor—have for decades taken pride in setting tight controls over the entry of people into Australia. Australia has historically been in favour of selective free trade (which has meant, mainly, Australian commodity exports) but has often been far less inclined to support the free movement of other goods and services into and out of Australia.

An issue related to the walls is that in recent decades Australia has become much more risk-averse. We want more safety – so we have progressively introduced an expanding regime of controls on both imports and exports of goods and services and people. All in the name of protection.

But the trouble is that protection is, inevitably, protectionist.

A second problem is that over time, protection will weaken Australia. Australia is a small country (population: 26 million) on the rim of a large and rapidly growing Asian region (population: around 4 billion). Australia needs to have a strong, expanding economy to be seen as successful and a worthwhile partner.

It is a central economic fact that openness is a key factor in supporting long-term growth. This is one of the most important lessons of economic history since the Second World War.

In 2008, in a major report on international economic issues, the World Bank’s Commission on Growth and Development emphasised the central role of openness. Surveying the experiences of 13 high-growth economies since 1950, the Commission concluded that the essential shared characteristic and “the central lesson of this report” was that “during their periods of fast growth, these 13 economies all made the most of the global economy”.

… was not possible before 1950. It became feasible only because the world economy became more open and more tightly integrated.

Openness in trade is important – but the concept of openness goes well beyond trade. Australia needs to be open to two-way capital flows, to technology, to ideas, and to international knowledge.

The recent Asialink Business report on economic relations with Asia, “Winning in Asia”, addresses these issues. One of the headline messages of the report—which will surprise nobody with commercial or economic experience in Asia—is that internationally diversified Australian companies generally create more value for shareholders than companies that are inward-looking and focused on the Australian market. 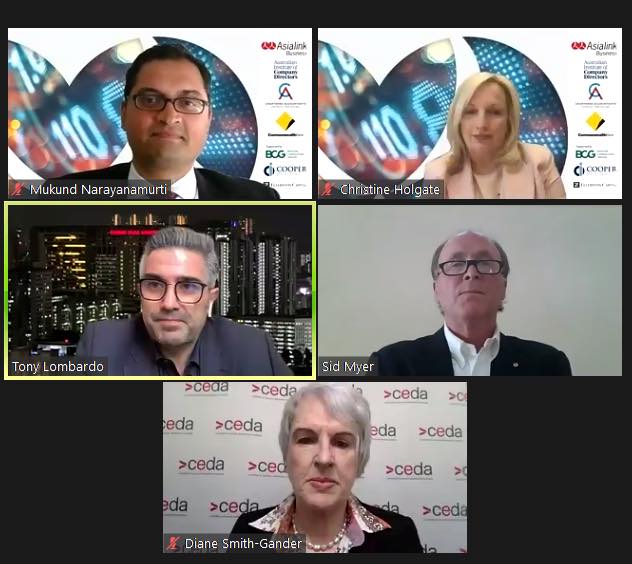 The online launch of 'Winning in Asia' attracted over 900 attendees across Australia and the region. Image credit: Asialink Business.

But a more worrying finding is that most senior leaders in the top Australian companies are not “Asia-capable.” The report noted that “for as long as we remain export-driven in commoditised sectors” this may not matter so much. In other words – so long as Australia remains a big mine and a big farm, it does not matter much that Australian business leaders know little about Asia.

Looking to the future, this needs to change. If Australia is to join in the great Asian boom over the next fifty years, we need to focus much more on the provision of services and the involvement of Australian firms in infrastructure. We need Australian banks and insurance companies to become more engaged with Asia as well. The Asialink report observes that “Our banks and insurance companies are very low with their international exposure.”

It would help, too, if government leaders in Australia were more Asia-capable. Few Australian politicians have much knowledge of Asia, and few senior public servants at the federal or state level would meet Asialink’s criteria for ranking as Asia-capable. We are more inward-looking, and more monolingual, than we realise.

A third conclusion of “Winning in Asia” is that “regionalism is the new globalism.” We are hardly aware of it in Australia yet, but regionalism in Asia is gathering strength. Asialink notes that “Australia will need to increasingly compete for a share of Asian trade, investment and tourists as they increasingly migrate towards integration within their own region.”

Indeed, Australia has a blind spot about Asian regionalism. We currently have difficulties with China; our links with India remain underdeveloped; and our involvement with ASEAN is half-hearted.

For the time being, coronavirus is masking all of these issues. Sooner or later the coronavirus shadow will pass. But while coronavirus is with us, we should resist the siren song of protectionism. And we should aim to open the Australian economy to global trade, investment, technology, and ideas as soon as possible.

Peter McCawley is an honorary associate professor at the Australian National University, former Dean, Asian Development Bank Institute, Tokyo, and a former economic adviser to the Australian and Indonesian governments.