Having suffered the depredations of a violent military takeover and a collapse in medical care, the people of Myanmar are now confronted with one of the worst coronavirus outbreaks in the region. Former ambassador Nicholas Coppel argues that the past record suggests little action can be expected from a military regime that is likely to “callously welcome” the impact of the disease on dampening civil unrest.

Six months after Myanmar’s coup d’état, the military are failing in their bid to control the country. The generals, who accused the civilian government of Aung San Suu Kyi of stalling peace negotiations, poor economic management and compromised elections, have abandoned the peace process, aborted Myanmar’s democratic transition, sparked widespread violent civil unrest and sent the economy into freefall.

But the biggest failure has been the inability of Myanmar’s generals to gain acceptance, let alone support, from the people of Myanmar who had expressed their democratic wishes in elections last November. In those elections, Aung San Suu Kyi’s National League for Democracy won a massive 83 percent of the contested seats. The citizenry responded initially to the February 1 coup by staging a Civil Disobedience Movement. Many medical professionals ceased working in government hospitals and instead provided medical services in private clinics and homes.

The generals didn’t care and requisitioned hospitals as quarters for soldiers brought into the main cities to quell the protest movement. The death toll from the military crackdown has reached one thousand. Medical professionals treating wounded protestors have been beaten or rounded up and charged with high treason. According to the UN High Commissioner for Human Rights, Michelle Bachelet, there have been more than 240 attacks on health-care facilities, medical personnel, ambulances and patients. Into this man-made failure strode coronavirus which has run rampant while testing, treatment and vaccination have been seriously disabled.

The United Nations Special Rapporteur on the situation of human rights in Myanmar, Tom Andrews, called it a perfect storm with an explosion of cases, including the delta variant, the collapse of Myanmar’s health care system, and a deep mistrust of anything connected to the military junta. Andrews called on the international community to provide emergency humanitarian aid and to facilitate a non-junta, non-political body to coordinate a COVID response.

MEDAID International Foundation, a US based non-profit medical aid foundation, echoed this call and appealed for an urgent direct intervention by the international community to implement a COVID strategy and create ‘safe health care zones’ inside Myanmar where care could safely be provided to patients. Numerous other organisations, including the Australia Myanmar Institute, have since endorsed and associated themselves with this appeal.

Following the coup, donors diverted their development assistance programs away from supporting improved government service delivery to humanitarian assistance delivered through trusted partners. They did this to avoid legitimising the military council and they remain reluctant to deliver humanitarian relief through military-controlled channels.

For its part, the military council is unlikely to seek or readily agree to direct international humanitarian assistance. Military personnel and their families have privileged access to the few functioning medical facilities and have a long tradition of indifference to the welfare of the rest of the nation’s citizenry. In May 2008 Cyclone Nargis swept through the Ayeyarwaddy delta region killing 138,000 people or more making it the nation’s worst recorded natural disaster.

Foreign government offers of aid and assistance were turned down by then leader Senior General Than Shwe. The United States had a Hercules C-130 cargo plane in Bangkok loaded with relief supplies but it was denied permission to land in Yangon. The United Nations World Food Program had planes ready to go in Bangladesh, Thailand and the United Arab Emirates loaded with high protein biscuits for survivors, but they were denied clearance. One plane from Qatar loaded with relief supplies did manage to land but it was forced to return before it could disgorge its life-saving cargo. UN agencies, world leaders, and international NGOs were alarmed at the scale of the crisis and pleaded for their offers of assistance to be accepted. It was a week before a coordinated response led by ASEAN with assistance from the United Nations was permitted to commence.

Coup leader Senior General Min Aung Hlaing is from the same mould as Than Shwe, vehemently nationalistic, fearful of foreigners, stubbornly convinced that the country does not need the outside world and indifferent to the welfare of the people. On April 24 and prior to the spread of the delta variant, ASEAN leaders met in Jakarta principally to discuss, somewhat optimistically, recovery from COVID-19 and the Myanmar coup. The leaders reached a five point consensus on Myanmar which included a commitment by ASEAN to “provide humanitarian assistance through the AHA Centre”.  Established in 2011, the ASEAN Coordinating Centre for Humanitarian Assistance on Disaster Management (AHA Centre) facilitates cooperation and coordination of disaster management among ASEAN member states working through national disaster management organisations and in partnership with civil society, the private sector and international organisations such as the Red Cross and the United Nations. Australia promptly committed $5 million to the AHA Centre to provide humanitarian assistance to Myanmar. 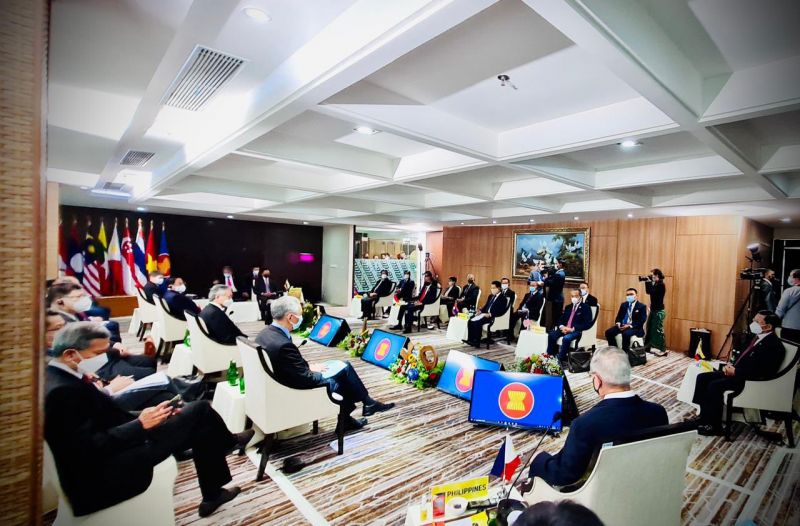 The Myanmar community in Australia are not happy with assistance being provided through ASEAN because it works with Myanmar’s National Disaster Management Organisations and they worry that the money will not reach the people on the ground. This reflects some misunderstanding about how Australian aid is delivered: Australia works through trusted partners and has the final say over how its contribution is to be spent. Humanitarian assistance is typically for lifesaving humanitarian relief supplies, rather than distributing cash to needy people.

None of the commitments in the five-point consensus, including delivery of humanitarian assistance, has been implemented. However, ASEAN’s offer has a better chance of being accepted than other proposals for international humanitarian assistance. In the meantime, the military will divert resources to protect themselves but otherwise will callously welcome COVID’s impact on public fear and dampened civil unrest.

The rapid spread of the coronavirus delta variant is making international assistance more urgent. The people of Myanmar have been robbed of democracy, freedoms, a growing economy, and now access to healthcare when they most urgently need it. With pressure from within Myanmar, foreign assistance is likely, eventually, to be accepted but nothing called an international intervention will.