As anxieties grow over the strategic outlook, former Defence Minister Robert Hill endorses the need for greater self-reliance. But he notes ‘keeping Australia safe’ will depend on conflict avoidance – something that is not entirely in our own hands.

The world is quite unsettled at present. COVID-19 has added a new layer of anxiety from both a health and an economic perspective. Global institutions seem to hold little authority, including moral authority. Even long-term alliances cannot be taken as a given. Deterrents will be tested, as is already occurring. Lead times will be reduced. Capabilities need to be reassessed. Self-reliance is becoming more important.

The Australian government seems to have recognised this new environment. Tensions are palpably higher, and not just between the US and China. The environment is very different from just a few years ago in 2016, when the last Australian Defence White Paper was published. In the Governor General’s speech to open the current Parliament, just one year ago, the government referred to Australia’s relationship with China as that of “strategic partners”. Would that be said today? It certainly wouldn’t be said by China.

Major powers tend to write their own rule book. And as China has grown more powerful, it has become more brazen in this practice. There is no suggestion that China will alter course. So, whilst cooperative relations are obviously in our best interest, they are going to be more challenging to achieve and maintain. Major powers also respect strength. This is why the Australian government’s initiatives to invest in more potent capabilities, improve supply-chain arrangements, strengthen sovereign industrial capabilities and improve responses to threats in the “grey zone” are warranted.

Equally warranted is the need to invest in the new technologies of Defence: autonomous platforms, high-speed missile systems, directed-energy weapons and capabilities to counter emerging space threats. Whilst it might be said that the 2016 White Paper was a little too sanguine in its strategic assessment, it is easy to be wise in hindsight. However, even on the 2016 assessment, the force structure plan could reasonably be criticised for failing to recognise that new technologies in the information age were demanding a significantly different force structure and different capabilities.

The decision to prioritise “our immediate region” is interesting. In fact, it has been a priority for a long time, whilst the reality has been that the conflicts in which we have been principally engaged have been further afield. The reality has been driven by the requirement to participate in coalitions of the willing. The reality is also that it remains highly unlikely that we will engage in a major conflict without allies, and that flexibility to adapt to the unexpected will continue to be as important as ever. 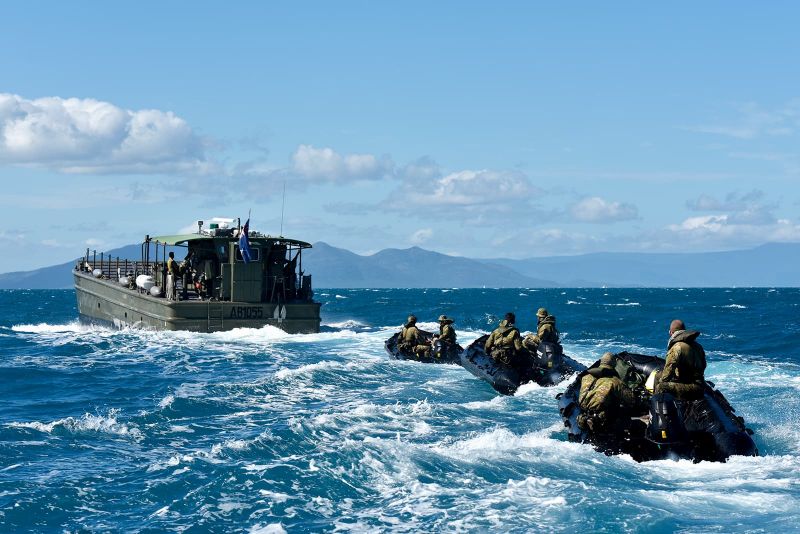 Members of the Australian Defence Force engage in helocasting exercises in support of US Marines and Navy corpsmen off the east coast of Australia - June 11, 2018. Image credit: US Indo-Pacific Command, Shutterstock.

The quest for self-reliance has seen the government recommit to building a resilient and internationally competitive defence industrial base. The government is somewhat self-congratulatory in this area, while anecdotal evidence suggests it is still hard for Australian businesses to succeed against foreign competition. Within much of Defence, there is an ingrained preference for foreign (usually American) suppliers. There will have to be a whole-of-government determination for this objective to be achieved.

The commitment to enhance offensive cyber capabilities, and the ability to deploy these capabilities on operations, is also interesting. This capability was not even disclosed until 2016. It illustrates how fast this aspect of warfare is changing. Now, it should be assumed that all potential adversaries possess these capabilities, most of which have not been tested in anger. To win the cyber war might well be to win the battle. A lot of traditional deterrent capability could well be rendered redundant.

In a similar vein, the 2020 Plan aims to improve the resilience and self-reliance of Defence’s space activities. Some might be a little surprised to learn that we have self-reliance in the space domain! In fact, the goal of self-reliance in space might not even be realistic. But whether it is sharing the burden with allies, or building our own independent capabilities, the reality is that enhanced space domain capabilities are not just a need for the future, but for today. It might be argued that this new urgency further evidences that the 2016 Plan was weighted too much towards traditional threats and capabilities, rather than those that are rapidly emerging.

The reality is that Australia has a relatively small but very capable defence force. The level of its capability is the envy of most. It is also well funded in comparative terms. Giving the force further long-range capability will enhance its potency. This is good insurance in a deteriorating geopolitical environment. Also appreciating that it will not be as easy in the future to maintain a capability advantage with the globalisation of technology and information is a realistic wake up call. However, keeping Australia safe will require more than a capable defence force. The goal is to avoid conflict, and the responsibility for that is shared by many players. This is sometimes overlooked.

Robert Hill was Australia’s Minister for Defence from 2001–2006 and a member of the Australian Senate from 1981–2006, representing South Australia. Robert also served as Environment Minister, and led the Australian delegation at the Kyoto climate change conference and introduced the Australia’s Renewable Energy Target. He is currently Adjunct Professor in Sustainability at the US Studies Centre at the University of Sydney, and Chairman of the Cooperative Research Centre for Low Carbon Living at the University of New South Wales.

This article was first published by Dragoman Consulting.