Trade has caught most headlines, but it is the volume of capital flow between the two countries that speaks to a declining level of trust and goodwill between Australia and China, writes Diane Hu.

Australian investors were “quietly making their own exit” from China amid deteriorating relations in 2020, according to the latest figures from the Australian Bureau of Statistics (ABS). At the same time, however, the United Nations Committee on Trade and Development found that China became the world’s largest recipient of foreign direct investment (FDI), with flows rising by four percent in 2020 to USD163 billion.

In a commentary, the former deputy editor of the Australian Financial Review Greg Earl argues that this “voluntary quiet departure by Australian investors from the region’s biggest economy”, including by services companies like online employment business Seek, represents an “interesting sovereign-risk decision”.

Australia’s FDI in China, which more than halved last year according to the ABS figures, clearly illustrates perceived risks by Australian businesses with a China presence. As the Chinese idiom goes, “ducks are the first to know when spring comes and water warms” (春江水暖鸭先知). Only in this case, Australian companies are the first to sense the cold and danger, though they have largely chosen to remain quiet in public debate.

Interestingly, sovereign risk(s) associated with a shifting regulatory environment and the worsening of bilateral relations were sensed by Chinese investors in Australia even earlier, between 2017 and 2018.

While Australian investment in China has long been minimal, Chinese investment in Australia surged in the financial year 2005-06 to AUD7.259 billion, ranking third among investor economies. Statistics from Australia’s foreign investment screening body, the Foreign Investment Review Board (FIRB), show Mainland China remained in the top three — except for 2006-07 (when it was eleventh) and 2007-08 (sixth) — until 2018-19 when it dropped to the fifth. It then fell to sixth in 2019-20.

The fall in investment volume is more startling than that in ranking. A compilation of FIRB annual reports below illustrates that approved Mainland Chinese investment in Australia (excluding investment in residential real estate which tends to be initiated by individual investors) experienced a 53.2 percent decrease in 2017-18. The volume then halved over the following two years, returning to the level of Chinese FDI 15 years ago.

Source: Annual Reports by the Foreign Investment Review Board.

Admittedly, approved foreign investment is subject to a variety of factors including, for example, restrictions China imposed on “irrational investment” overseas from late 2017. Annual flow of Chinese investment to Australia as summarised above testifies to that restraining factor, with a downward trend in the calendar years 2017-18.

The two financial years of 2018-19 and 2019-20 saw enthusiasm from Chinese investors in Australia further dampened, with year-on-year declines in the level of approved investment of 36 percent and 20 percent respectively. During the same period, however, total Chinese foreign direct investment to all countries saw a mild decrease of 4.3 percent and 2.9 percent. Even taking into account the impact of the COVID-19 pandemic and the zero screening threshold Australia imposed on foreign investment in March 2020 the exit of Chinese investors from Australia is evident.

The Demystifying Chinese Investment in Australia report draws on KPMG and the University of Sydney Business School’s database, with “raw data [collected] from a wide variety of public information sources”. The initiative, which started in 2011, tracks Chinese investment in Australia, “including by subsidiaries or special purpose vehicles”.

The number of completed deals registered by their database also shows a downturn in 2018. From peaks of over 100 transactions in 2016 and 2017, it fell to 74 in 2018, and then 42 in 2019 and 20 in 2020. The number of completed deals is arguably a more apt indicator of investor sentiment than investment volume, which can be easily skewed by mega deals. The ANU CHIIA’s database tells a similar story, but it indicates a downturn a year earlier than the KPMG-University of Sydney dataset. It finds that Chinese investment in Australia peaked in 2016 at AUD14.9 billion and plummeted to just over AUD1 billion in 2020. 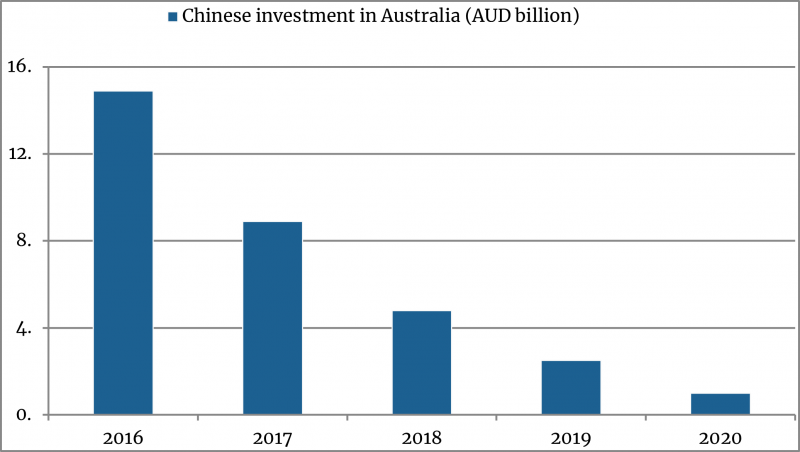 Two developments in 2021 seem to indicate a new level of risk perceived by the Chinese side: China Investment Corporation’s planned exit of its stake in Sydney’s landmark tower Grosvenor Place; and a drastic decline in the ranking of Australia as an investment destination as assessed by China’s top think tank Chinese Academy of Social Sciences.

China Investment Corporation (CIC) — China’s biggest sovereign wealth fund — took a 25 percent stake in Grosvenor Place in 2015 and outbid competitors in 2020 to take another 50 percent. While the FIRB finally approved the acquisition mid-2021, the decision took more than six months (the longest permitted time frame under the screening mechanism). Reports about CIC’s possible retreat from the deal were finally confirmed six months later when “US group Blackstone snapped up [the] half stake” instead. The Australian Financial Review earlier reported that CIC also planned to sell its remaining 25 percent.

Although CIC started reducing its exposure to real estate from 2018, turning back on Grosvenor Place would still be an alarming signal. The deal was seen at that time as “a vote of confidence for the Australian capital markets”. CIC’s planned pull out is a clear sign of concern among Chinese investors.

This is echoed by the revised risk assessment of Australia as an FDI destination in the annual report of China’s leading think tank, the Chinese Academy of Social Sciences (CASS). The CASS Institute of World Economics and Politics has been issuing the Country Risk Rating of Overseas Investment from China (CROIC-IWEP) since 2014.

Australia was ranked 15 out of 114 countries in the 2021 version, dropping from its long-term top four position. In addition to Australia’s soaring budget deficit, the downgrade is mostly attributed to a more negative assessment in categories of ‘the likelihood for an investment to be blocked’ and ‘bilateral relations’. The assessment is based on a survey of a panel of Chinese experts in areas of economics, international relations and law. 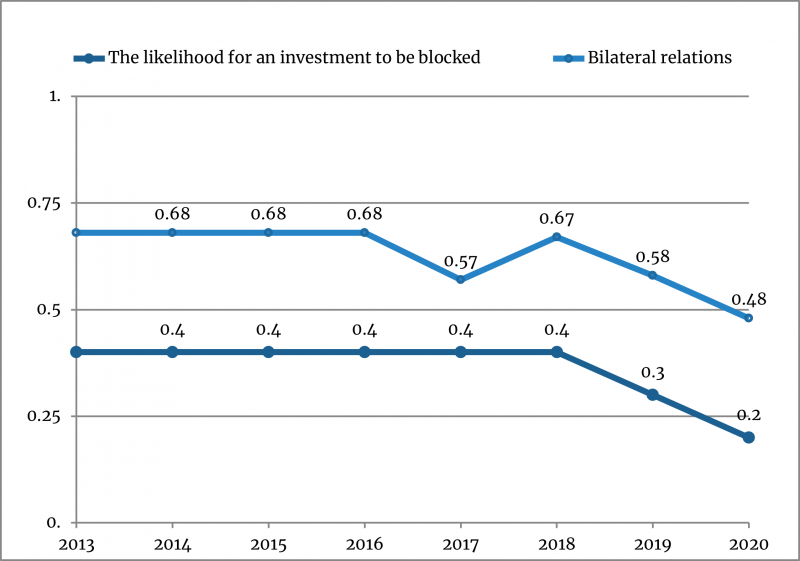 What does this pattern say about the future of bilateral investment? Australia’s capital flow to China is set to remain minimal, with the departure of Australian services companies and, more recently, consultancies facilitating Australian investment in China. Investment the other way is not expected to recover in the near future either.

While surging Chinese investment in Australia from 2005 was once celebrated as part of closer economic ties, its downside has not been readily acknowledged in either China or Australia. The sudden influx of Chinese capital has been intimidating to some segments of Australian society and, with a conservative government and heightened geopolitical rivalry, framed as a threat to national security.

Our comparative study on foreign investment regulation in advanced economies indicates that not only is “Australia …not alone in taking great account of national security issues in its investment regimes”, as declared by the late FIRB Chair David Irvine in October 2021, Australia has pioneered this wave of regulatory responses across the industrialised world. The host countries that draw the most Chinese capital tend to see the most controversy surrounding it.

This caution towards Chinese businesses is evident with both state-owned enterprises and private companies. The prolonged screening on CIC’s commercial real estate investment sounds the latest alarm.

What about trade? The majority, if not all, of Australia’s export consumer products to China can be readily replaced. In relation to dairy products, for example, New Zealand has long dominated imports to the Chinese market, with Australia lagging far behind the Netherlands, Ireland, Germany and France. Customs statistics for 2019, show New Zealand accounted for 40.77 percent of Chinese dairy imports, the Netherlands 15.87 percent, Ireland 8.18 percent and Australia 7.04 percent. For wine, fruity Chilean, Italian and Spanish products which are also favoured among beginner drinkers quickly took over the space left by Australian brands; and French wine instantly recovered its ranking as the top wine import, just a year after Australia held that position.

Tourism will prove to be dependent on the readiness of flights to Australia, how welcome Chinese tourists believe they will be, and comparative advantage against other long-haul tourist destinations.

For education, Australia may very well continue to be a popular destination for Chinese students, but growth of student enrolments is expected to slow. Even before COVID-19, the high growth rate in 2017 and 2018 had slowed in 2019. The impact is set to be greater on the smaller non-Group of Eight, universities than those in the Go8.

In terms of resources, serious efforts have already been made in China to find alternative sources and diversify. After all, ‘decoupling’ in a world of heightened geopolitical rivalry and ideological grouping means more self-reliance and self-sufficiency.

As J. Stewart Black and Allen J. Morrison wrote in their piece for Harvard Business Review, despite “the popular view in the United States that decoupling largely involves discouraging imports so as to safeguard or repatriate U.S. jobs”, from the Chinese perspective decoupling is a strategic shift, with the key objective of “eliminating its dependence on foreign countries and corporations for critical technology and products” (and in the case of Australia, resources). One would just need to look at the level of resources investment China has made to understand how conscious it has been of that deficiency.

It would be hard to predict how effective those efforts will be across various mining exports. But from what can be seen so far, the will on the Chinese side is firm and strong.

This would present a fundamental challenge to an assumption made in much of the debate on Australia’s China policy that economic ties can be built without political trust first being rebuilt. It would be a grave challenge for any future Australian government to figure out a way to drive forward relations with China on only one wheel.

This work was supported by the Fundamental Research Funds for the Central Universities [2019JJ013].

A version of this article was first published by Melbourne Asia Review, Asia Institute.