As a high-profile Australian Government program, what has it achieved?

The New Colombo Plan has celebrated its first five years funding Australian students to study and work in the Indo-Pacific. The Plan was launched in 2014 by new Minister for Foreign Affairs Julie Bishop and quickly became one of her signature initiatives.

Inspired by the original Colombo Plan – created in 1951 to bring the future leaders of Asia to study and form connections in Australia– the New Colombo Plan focuses on getting young Australians to study and train in the Indo-Pacific, rather than traditional destinations outside the region such as the US and Europe. According to Julie Bishop: “Our country will benefit enormously from having young ambassadors from Australia who have an understanding of and an insight into the region that only comes from living and studying and working there.”

Beginning with a pilot program in four locations, the New Colombo Plan has since expanded to 40 locations across the Indo-Pacific. It’s run as a partnership between the Department of Foreign Affairs and Trade (DFAT) and the Department of Education as a student mobility and public diplomacy program.

The New Colombo Plan supports Australian undergraduates aged 18-28 at Australian universities to study and work in the region. It has two parts: scholarships and a mobility program.

Scholarships fund students to undertake a semester or more abroad with a combination of university classes, language training and work experience. Minister for Foreign Affairs Marise Payne announced the 125 New Colombo Plan Scholars for 2020 as “Australia’s best and brightest undergraduates from all universities across the country.”

The mobility program funds shorter programs ranging from two weeks up to a semester. Universities will run courses that include an in-country component, such as The University of Melbourne class on global management consulting in Bangkok or creative arts workshops on manga, animation and ceramic art in Japan offered by The University of Southern Queensland. 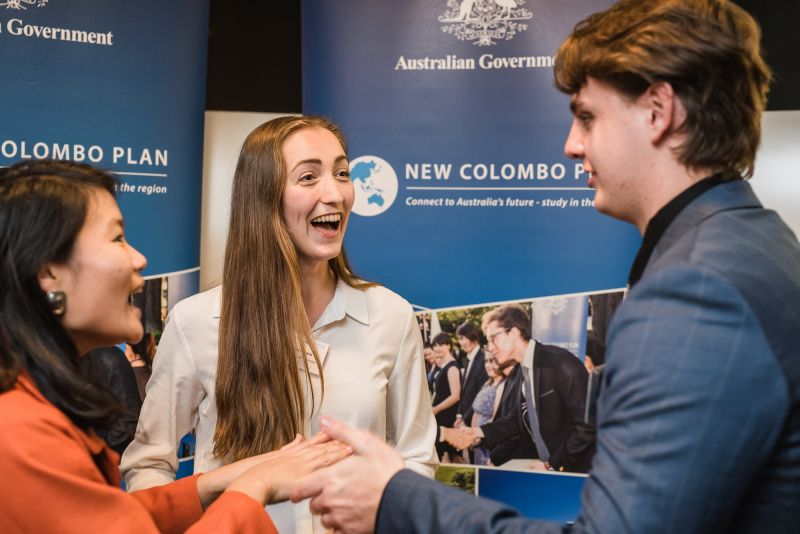 The mix of a small number of immersive experiences plus wider mobility program means that the New Colombo Plan is reaching a large number of young Australians, fulfilling the hope that it would become “a rite of passage to benefit us all”.

Importantly, the New Colombo Plan provides opportunities to engage with Asia to those who might not otherwise be able to access it. For example, roughly a third of scholars are from regional and rural areas and a quarter are the first in their family to study at university. Almost five per cent of scholars identify as Indigenous, compared to less than three per cent of the population, and 15% speak a language other than English at home.

One aim of the New Colombo Plan is to provide Australian undergraduates with skills and cultural literacy in the region. Research suggests that this aim is being met. In a study of mobility programs to Indonesia, Malaysia and Vietnam, students reported having more intercultural sensitivity after their trip, as they became more aware of and filled gaps in their knowledge of the host culture.

The Australian Survey Research Group evaluated the program on behalf of DFAT in a survey of over 3,000 mobility participants, finding that most of those who took part believed that the program was a life exchanging experience. 91 per cent of those who did a work-based experience thought that these developed their professional skills and knowledge. While 80 per cent of participants who completed mobility programs agreed that these helped them make professional connections with people or organisations in their host country. Many past participants have spoken in glowing terms of the program. New Colombo Plan Alumni Ambassador Andrew Phong described feeling “empowered to further develop my unique capabilities gained through overseas engagement”. New Colombo Plan PwC Scholar and Alumni Ambassador Julian Vidal reflected that his program “unlocked opportunities that I could only have dreamed of”, including interning with Uber, Mitsubishi and PwC Japan, as well as attending events at the Australian Embassy in Tokyo. According to Dana Carmichael, who went to Singapore, “the doors an NCP scholarship can open for you are unreal”. This is in line with research on employment outcomes that shows that those who studied abroad during their degree were more likely to be employed after graduating.

One challenge is to reap a lasting intercultural benefit to students after their return to Australia. A study of a group of mobility participants by Agnieszka Sobocinska and Jemma Purdey expressed concern that study tours can lead to a short-term period of emotional involvement and self-reflection without creating lasting connections.

One of the most important effects of the New Colombo Plan is to build a pipeline of future leaders. In “Match Fit”, PwC Australia, the Institute of Managers and Leaders and Asialink found that the level of Indo-Pacific capability at senior levels in Australia’s top companies is troublingly low. The New Colombo Plan is helping develop the Asia capability of the next generation of Australia’s leaders.

The New Colombo Plan has an Alumni program, currently delivered in partnership with Asialink, that allows alumni to continue their engagement with the region through access to networking events, professional development and mentoring opportunities as well as membership of a community of future leaders with a shared passion and experience in the Indo-Pacific.

Assessing whether the New Colombo Plan is meeting its aim of promoting a positive image of Australia is complicated by the fact that the benefits of public diplomacy programs are usually seen in the medium to long term rather than in five years. Common sense suggests that having thousands of young people serve as unofficial ambassadors for Australia in the region has had a positive impact. The New Colombo Plan shows two of the hallmarks of best practice in public diplomacy: genuineness and mutuality.

Efforts are underway to build up a body of evidence to measure the lasting impact of the New Colombo Plan on Australia’s public diplomacy in the region, as well as on participants’ Asia literacy and employment outcomes. Asialink is working with DFAT to evaluate the effectiveness of its delivery of the Alumni program. A New Colombo Plan Project is currently being conducted by Deakin University with support from the Australian Research Council to assess the long-term effect of mobility experiences in the region on students and their utility as a mechanism for public diplomacy.

There are clear national benefits in having young Australians form connections and build literacy in the cultures of the countries of the Indo-Pacific region that will be important to Australia’s future.

Australians should celebrate the fifth birthday of the New Colombo Plan as it helps give the next generation of Australian leaders an international outlook and a familiarity with the cultures of the region.

This article first appeared on Pearls and Irritations on March 11, 2020.