The woman at the centre of Myanmar’s crisis, State Counsellor Aung Sun Suu Kyi, has been jailed and cut off from supporters since the February coup. Veteran analyst Andrew Selth asks what lies ahead for the country’s most popular political figure.

In the flood of articles, op-eds and commentaries that has been published since the February coup in Myanmar, surprisingly few have looked closely at the plight of ousted State Counsellor Aung San Suu Kyi. Yet, in some ways her fate is just as critical to the final outcome of the crisis as the current confrontation between the armed forces, or Tatmadaw, and the diverse elements arrayed against them, both inside and outside Myanmar.

As always when there are unexpected developments in Myanmar, there is a great deal that we do not know, a gap invariably filled by rumours, gossip and speculation. However, some facts are on the public record, permitting a few cautious conclusions.

On 1 February, when Commander-in-Chief Senior General Min Aung Hlaing declared that the Tatmadaw was taking back executive power, Aung San Suu Kyi was placed under arrest. It is not clear where she has been held since then. Some news media reports have claimed that, after a period confined to her home in Naypyidaw, she was moved to ‘an undisclosed location’. Her rare court appearances since then have been via video link.

Aung San Suu Kyi faces several formal charges. The first relates to the illegal importation and improper use of six hand-held radios, found in her house the day she was arrested. She has also been accused of violating Myanmar’s Natural Disaster Management Law, by failing to observe regulations relating to the COVID-19 pandemic on six separate occasions. Another charge is that of inciting public unrest, a crime punishable by three years in jail.

More recently, she has been accused of corruption, for allegedly receiving large bribes from both a political operator and a prominent businessman. Perhaps the most serious charge, however, was that made in late March, when she was accused of committing offences under Myanmar’s official secrets act. No further details have been provided, but if tried and found guilty under that law, she could be sentenced to up to 14 years in prison.

It would appear that the junta has decided to use the country’s highly malleable legal system to blacken Aung San Suu Kyi’s name, justify her continuing detention and by extension to help explain the military coup. However, there is probably a longer term objective at play here as well, and that is to ensure that Aung San Suu Kyi, for decades a thorn in the Tatmadaw’s side, never holds public office in Myanmar again.

As always, it is hard to know the junta’s thinking, but it seems that, whatever the outcome of the current confrontation between the security forces and the pro-democracy dissidents in Myanmar, the generals hope to remove Aung San Suu Kyi as a factor in domestic politics. Her determination to amend or subvert the 2008 constitution, which protects the Tatmadaw and guarantees its central role in the country’s affairs, has made her a prime target.

Also, without Aung San Suu Kyi, the National League for Democracy (NLD) would be grievously weakened. It would lose a strong and dynamic leader who has provided much of its organisational focus and popular appeal. She has no clear successor. As rival factions and personalities competed for positions and policies, the party’s internal stability would be severely compromised, threatening its claim to be the leading civilian party. 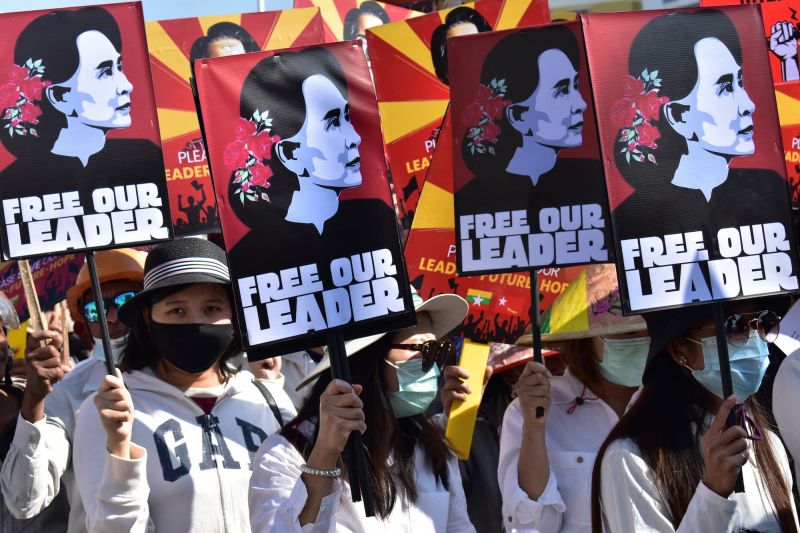 Aung San Suu Kyi's immense popularity has for decades been a thorn in the Tatmadaw's side. Image credit: Robert Bociaga, Shutterstock.

Given Aung San Suu Kyi’s enormous popularity, however, as evidenced by the NLD’s landslide election win last November, the generals know that they cannot simply lock her up and forget about her. She would become a martyr and, as she did for almost 15 years, be the subject of a global campaign for her release. The generals need to take away her allure and put in place institutional obstacles to prevent her re-emergence as an active political force.

Hence the legal measures being taken against her. Even if they did not result in a lengthy prison sentence, or seriously damage her reputation, successful prosecution of the cases against Aung San Suu Kyi could see her legally barred from public office. Convictions could also carry additional prohibitions on her political activities, for example by preventing her from lending her name and prestige to a political party or individual candidates in the future.

The country’s arcane mixture of new and old laws, some dating back to British colonial days, would give the judges hearing Aung San Suu Kyi’s cases wide scope to impose such restrictions. The courts in Myanmar have not been independent in living memory, and would deliver whatever verdict the Tatmadaw desired. The generals could then claim, as they have done in the past, that they cannot challenge a formal ruling by the judiciary.

Throughout this entire process, Aung San Suu Kyi can be expected to fight as hard as possible to prove her innocence of all the charges laid against her. She will also emphasise her position as the legitimate State Counsellor of Myanmar. In this effort, she will doubtless be backed by her supporters both at home and abroad. The stance adopted by foreign governments will also be important, in both practical and symbolic terms.

Aung San Suu Kyi was once the darling of the Western democracies, lauded for her long struggle for peaceful political change and human rights, mostly while under house arrest. She began to lose favour after her release in 2010, mainly for not observing her own principles. Her real downfall, however, came in 2017 when she refused to condemn the Tatmadaw’s atrocities against the Rohingyas, even defending them in the International Court of Justice.

This has placed members of the international community in something of a quandary. While Aung San Suu Kyi is no longer admired as a democratic icon, she remains the immensely popular, and popularly elected, leader of Myanmar, now under a repressive dictatorship. Despite any reservations they may have about her, democratic governments feel obliged to defend her and criticise her detention by the junta on what are clearly trumped up charges.

Besides, they know that, in the unlikely event that the generals are forced to soften their hard line, Aung San Suu Kyi is the obvious candidate to unify the country and help it recover. She would attract foreign aid, trade and other forms of assistance to a country that currently seems to be heading towards state failure. This once again raises the question, however, whether the military leadership could ever overcome its visceral hatred of the opposition leader and allow her to ‘return to the legal fold’. On current indications, the answer is an emphatic no.

Then again, Myanmar is always capable of surprises. When Aung San Suu Kyi was under indefinite house arrest and the military regime was growing ever more powerful, few observers would have predicted that she would one day become the country’s de facto leader. It is no wonder that in Myanmar even the fortune tellers hedge their bets.