Ahead of a planned summit of Quad leaders, President Biden has offered the first taste of his strategic policy. As Prof. Brad Nelson finds, it is a more realistic outlook that acknowledges the decline of American exceptionalism, but one that also contains risks for the Indo-Pacific.

On March 3, the Biden administration released its Interim National Security Strategic Guidance. As the title suggests, it is a preliminary look at the foreign and defense policy roadmap of the United States under the new administration. It precedes the White House’s National Security Strategy and the Pentagon’s National Defense Strategy, both of which should follow later this year and will likely flesh out many of the points addressed by the latest document.

The strategic guidance was written and published for several reasons. First, it demonstrates a commitment by Team Biden to transparency in foreign policy. This document shows the White House thinking through in almost real time its foreign policy priorities – a marked contrast with the Trump administration, where politics and policymaking were consistently shrouded in secrecy, done behind closed doors, and often only reluctantly revealed after the fact.

Second, it is an effort by the Biden administration to signal — to Americans and a global audience — its priorities, the strategies and policies it will pursue, and how it might implement them. Relatedly, the document aims to highlight the substantive foreign policy differences with his predecessor. Whereas Trump pursued a highly nationalistic, self-centered foreign policy, Biden is wholly embracing a liberal internationalist approach to the world, one in which democracy, alliances, and international institutions are centerpieces. By openly broadcasting this information, Biden is creating credible commitments that US citizens, US allies, and American foes now expect the US to try to fulfill or risk reputation damages down the line.

Third, the strategic guidance is also a tool that will be used by US government departments, agencies, and senior level staff. It will inform and guide the Biden administration as it crafts and implements foreign and defence strategy and policy. Biden wants to call attention to the process of US policy; that it’s organised, deliberate, and high functioning. Of course, this too can be interpreted at a veiled distinction from the Trump era policy process that was so often dictated by Trump’s Twitter page.

As is so often the case with US government policy documents, the substance of the strategic guidance is ambitious, vague, and raises questions. It spotlights a wide range of domestic, international, and transnational issues, but doesn’t really spell out specifically how Team Biden will address them. As expected, it does go to great lengths to emphasise that the US under Biden prizes diplomacy, alliances, international institutions and agreements, and democracy (both America’s democracy and democracies around the world).

The major surprise comes on pages seven and eight, where the document states that “the distribution of power is changing, creating new threats,” such as Russia and China. This all but admits that the world is multipolar, with China and Russia as rising/resurgent great powers determined to challenge American power and influence and undermine US global interests. Perhaps this indicates the era of American exceptionalism, and by extension the reckless policies of that era, is over. After all, it’s hard to be exceptional, as the US often claims it is, while also arguing that other powers are America’s peers. 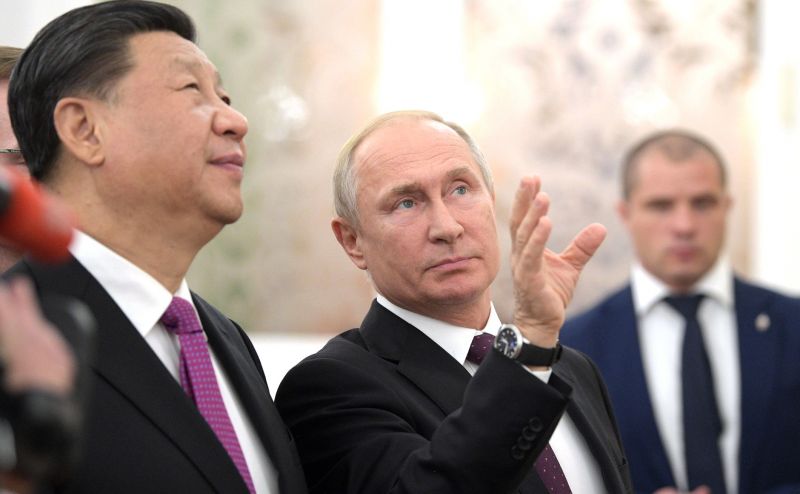 The strategic guidance also shows a clear overlap between Trump’s economic policy and Biden’s proposed economic agenda. Biden’s economic policy is more cooperative and seeks to work though the international order to redress US grievances, but those are mostly tactical differences from the Trump era. Both Trump and Biden embrace a similar nationalist economic policy, one that relies on sanctions to punish states, seeks to protect American workers, and desires fairer trade. On page fifteen, it states:

Our trade and international economic policies must serve all Americans, not just the privileged few. Trade policy must grow the American middle class, create new and better jobs, raise wages, and strengthen communities…. We will only pursue new trade deals after we have made investments in American workers and communities. And as we negotiate with other nations, we will stand up for American workers and small and medium-sized businesses, even as we continue to ensure that all American companies can compete successfully abroad.

None of this should be a surprise, however. On the campaign trail, Biden espoused pro-worker, populist economic policies that are favored by communities in the Rust Belt and the upper Midwest.

What does the strategic guidance mean for the Indo-Pacific? The case is mixed. At first glance, the news appears to be good for several Indo-Pacific countries. Certainly, Biden values US allies, and this document and his early diplomacy is evidence of the US recommitting to them. And Biden sees a special place in US foreign policy for US democratic allies, who appear to be the heartbeat of the White House’s plans. On page ten, the document states:

“Our democratic alliances enable us to present a common front, produce a unified vision, and pool our strength to promote high standards, establish effective international rules, and hold countries like China to account. That is why we will reaffirm, invest in, and modernise the North Atlantic Treaty Organisation (NATO) and our alliances with Australia, Japan, and the Republic of Korea – which, along with our other global alliances and partnerships, are America’s greatest strategic asset.”

Although it is listed as one of several crucial factors, the ascent and assertiveness of China is the key reason democratic allies will have an elevated profile in US foreign policy during the Biden era. Secretary of State Blinken calls China the number one geopolitical challenge for the US. And the strategic guidance statement contains a lengthy list of where the US will criticise, push back, if not outright contain, China’s behavior regionally and globally. This looks to be a multi-faceted effort that relies on bilateral, multilateral, and institutional settings, and has a vast number issues — some of which, like Taiwan, Hong Kong, Xinjiang, and Tibet, will be especially provocative to China — that serve as soft and hard battle lines in the fierce competition between the US and China.

Given the importance of US democratic allies in the Indo-Pacific, they should expect significant time, effort, and resources headed their way during the Biden era. And while it’s not specifically stated in the interim strategic guidance, Indo-Pacific democracies that aren’t formally allied to the US should expect wooing and various inducements to get them to hop off the fence. India and to a lesser extent Indonesia are crown jewels the US would like to secure, because their allegiance could well determine the success (or failure) of US foreign policy in the Indo-Pacific and the fate of America’s competition with China. 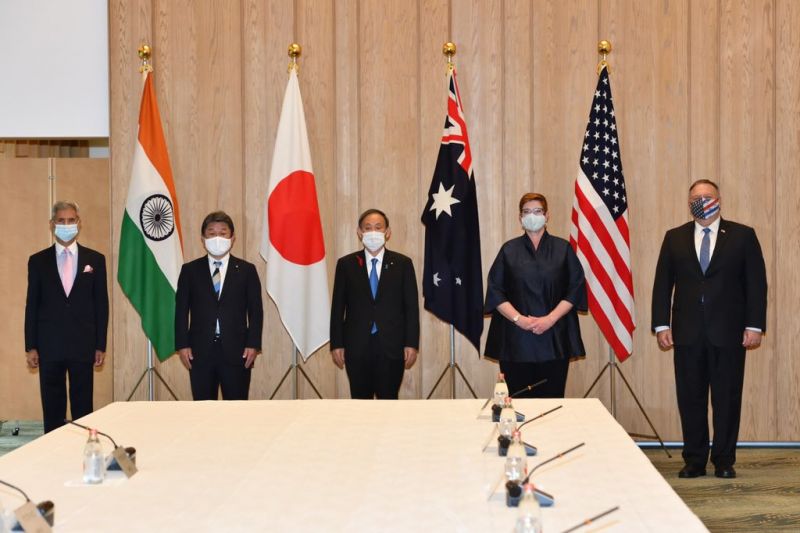 Toward that end, Biden has already closely embraced the “Quad,” which the Trump White House revived in 2017. Last month, Blinken met virtually with diplomats from the three other “Quad” nations – Australia, Japan and India. Biden has spoken directly with just about every leader in the Indo-Pacific, including the leaders in the other Quad nations, and is poised to speak in the coming days to his Quad counterparts in a virtual leaders’ summit. Although the Quad is designed to be a security dialogue on regional matters, and some — particularly the leadership in Beijing — worry that this is America’s attempt to create an “Asian NATO,” reports suggest that Biden is seeking to upgrade and broaden cooperation within the bloc by discussing “vaccine distribution diplomacy”. There are several goals here. One is to entrench, if not institutionalise, the Quad over time. A second goal is to push the agenda to see how expansive the four-way cooperation can grow. And lastly, the US would like to balance against China using both hard and soft power tools. The Quad’s power of attractiveness could be a vital and relatively low-cost instrument in boosting the favourability ratings of the American side at the expense of China.

The emphasis on democratic unity carries attendant downsides for the Indo-Pacific, however. The main problem is that the US sees its competition as not just a battle for money and power. Rather, according to Biden, it's an existential threat to the US and a battle for the direction of the world. In this battle, nations have two strategic options from which to choose. The first option is a pathway led by the US, in which democracy prospers and spreads. The world’s democracies work and play cooperatively and peacefully with each other, and internally they hold free elections, operate according to the open market, and guarantee human rights. The second option is the authoritarian road led by China in which states pursue regime security and internal stability at the expense of  political, economic, social, and cultural freedoms and opportunities. In the end, whichever side has more members, and by extension greater pooled power, is likely to win the Sino-US competition.

By framing the choices available to states in these Manichaean terms, the Biden administration views international politics as largely zero-sum. This should give Indo-Pacific nations some pause.  Dichotomous ideological thinking paved the way for a protracted, hostile and bloody Cold War era, caused the various destructive “forever” wars of the 2000s, and few within the region have the desire to head down that road with an economically powerful and globally interconnected China. And while the Biden administration likely does not want another Cold War, and instead prefers a rivalry with China that mixes competition with cooperation, the strategic guidance suggests something fundamentally different. If Indo-Pacific nations aren't careful, they could easily get sucked into a struggle with China in which they have to pick sides.

Brad Nelson is an adjunct professor of political science at Saint Xavier University, Chicago, Illinois, and co-founder and president of the Center for World Conflict and Peace. His twitter is @BNNelson74.