The resignation of Japan’s long-serving prime minister Shinzo Abe last week was big news not just for Japan, but the entire region. Professor Purnendra Jain, a veteran analyst of Japanese politics, unpicks the contest to replace him and the domestic and foreign policy challenges facing his successor.

The unexpected resignation last week of Shinzo Abe, Japan’s Prime Minister and Liberal Democratic Party (LDP) President, due to illness, surprised and even shocked many. Despite his two visits to hospital within a week and his fragile physical appearance, no one including his close allies and senior ministers had any inklings of his impending resignation. Abe kept this decision close to his chest and did not share it even with his senior ministers until just before his press conference.

Abe’s exit truly symbolises the end of an era in Japanese politics. All eyes now are fixed on who might be the successor to Japan’s longest-serving prime minister and what might be in store for its domestic politics and foreign policy.

The race to replace Abe is on and it is unclear at this stage who will win. It will definitely be a senior LDP figure, as the party enjoys majorities in both houses of the Japanese parliament and Japan’s opposition is awfully weak, fragmented and in disarray.

Some names have appeared in the Japanese media including that of Shigeru Ishiba, a veteran LDP politician who served in senior government and party positions in the past but who has remained on the periphery for some time. Former foreign minister Fumio Kishida and defence minister Taro Kono and foreign minister Toshimitsu Motegi also have expressed interest.

But Abe’s chief cabinet secretary Yoshihide Suga, who until last week denied his interest in the top job, is reportedly in front as both Abe and party secretary general Toshihiro Nikai, the two most powerful party executives, have thrown their weight behind Suga. Abe and Nikai belong to the two larger factions and between them they command 145 parliamentarians. Names of female contenders such as Seiko Noda and Tomomi Inada have surfaced too, but in Nagatacho—the Tokyo district where the parliament is housed—the male-dominated politics still weighs against a female prime minister. 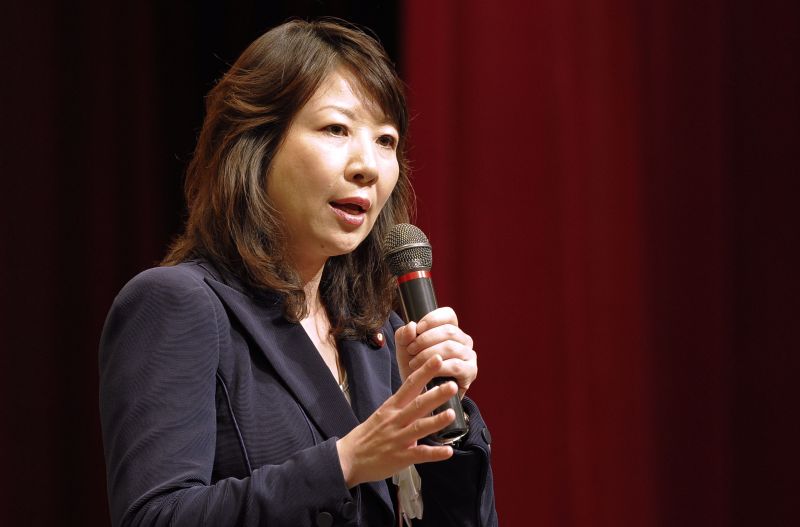 LDP politician Seiko Noda has been seen as a contender to replace Abe; however, the male-dominated nature of Tokyo politics makes the possibility of a female prime minister unlikely. Image credit: Jeff Boyd, Flickr.

LDP presidents normally are elected for three-year terms by both the party’s parliamentary and rank-and-file membership. But because Abe’s replacement will serve out only the remainder of his term until September 2021, the party executive is most likely to adopt an emergency clause to exclude the rank and file and limit the vote to the 394 LDP parliamentarians alone. Still, there has been strong opposition to this scenario and many young LDP parliamentarians, including the high-profile environment minister Shinjiro Koizumi, have signed a petition in favour of opening the election to all party members.

All the prime ministers who have come from the LDP have belonged to one of its factions. All the contenders to replace Abe in this race belong to a faction – bar one. The apparent frontrunner, Suga, has no formal factional affiliation. If elected, he will not only be the longest-serving chief cabinet secretary but also an LDP president without a faction. The lack of factional baggage does not make Suga free of factional influence, but it might give him scope to exercise some greater degree of independence over allocating ministerial positions and even policy directions.

Chief Cabinet Secretary Yoshihide Suga is said to be the frontrunner to replace Abe as prime minister. Image credit: Twitter.

Regardless of who succeeds Abe, the domestic and foreign policy challenges are enormous.

On the domestic front, the new leader first will have to satisfactorily tackle the coronavirus crisis. Abe received heavy criticism for his weak response and policy misjudgement on the pandemic. Complaints ranged from the size of two reusable masks distributed to each household to slow and reluctant moves to postpone the Tokyo Olympics, originally scheduled for July-August this year.

Second, and equally important, he will have to tackle Japan’s sagging economy and take measures to reinvigorate it. The earlier gains from Abe’s signature economic revival strategy of ‘Abenomics’ have dissipated, and the economy began to shrink even before the COVID-19 pandemic made Japan’s economy contract further and pushed it into recession.

In forming a cabinet, the new leader will have to set one eye on public approval. Opinion polls will be the first litmus test, and a crucial one, as a general election must be held before October next year. It will not be sufficient for the prime minister just to win the election; he must do so convincingly. The margin of victory will be climacteric to the survival of the leader.

It is notable that Abe’s popularity was in the 70s when he took office and receded into the 30s at the time he resigned. Abe also led the party to six national elections and won them all. It is too early to say but the new leader may decide to go for a snap poll sooner in preparation for winning the full-term party presidency in September next year.

As for foreign and defence policies, Abe’s successor will have big shoes to fill. Maintaining strong relations with the United States will be the most important task. Abe adroitly managed President Trump, avoided the worst, and did not get caught in the US-China trade and technology war. Abe was able to persuade Trump to embrace his signature free and open Indo-Pacific concept. However, tensions remain on questions of burden sharing and trade issues.

Japan’s neighbourhood policy also will be of utmost importance. Abe failed to resolve the issue of Japanese citizens abducted by North Korea in the 1970s and 80s, Tokyo still faces Pyongyang’s nuclear and missile threats, and relations with South Korea deteriorated under Abe with the escalation of the so-called ‘comfort women’ issue. Abe offered an olive branch to China and even delayed taking action to deal with COVID-19 in order to host Chinese President Xi Jinping in Tokyo in April. The visit did not, however, happen as coronavirus infections began to surge in Japan. Since then tensions between the two have heightened around the Senkaku Islands currently administered by Japan but claimed by China as its territory. How the new leader deals with this and avoids further escalation will be a Herculean task.

Japan has been under immense pressure both from its security ally the US, which is demanding further trade concessions and more budget for its forces stationed in Japan, and from China, the neighbour whose military assertiveness and aggressive behaviour creates awful stresses on Japan’s economic and limited military resources.

Abe proved adept at managing US and China relations. At the same time, he also built a strong regional network of like-minded countries through his Free and Open Indo-Pacific framework, including close personal relationships with the leaders of Australia, India and many Southeast Asian countries.

After Abe announced his retirement, leaders around the region and beyond posted tweets reminiscing about their engagement with Abe, among them Scott Morrison and his two predecessors, Malcolm Turnbull and Tony Abbott. Trump called him ‘the greatest prime minister in the history of Japan’ and a ‘special man’.

It won’t be easy for Abe’s successor to make an immediate impact on the global landscape and step into shoes whose footprint was wide and deep. But no matter who replaces Abe, it is unlikely there will be any radical departure in Japan’s foreign and defence policy directions.

The task at hand for the new leader will be to provide political stability, as neither Japanese voters nor the world would like to see a return to the revolving door of annual change of prime minister. That would be a disaster for Japan and indeed for Japan’s friends and partners around the world.

Purnendra Jain is Adjunct Professor in the Department of Asian Studies at the University of Adelaide.