Given the current mood across Australia — recently described by Qantas chief Alan Joyce as approaching that of a “hermit state” — it was hardly realistic to expect that there would be any significant boost to foreign aid in the budget. And indeed, the government announced (in effect) a further cut in aid spending, down to slightly over $4.3 billion. On the face of it, the cut – a little over 3 percent – is small.  But it needs to be seen in context.

For one thing, the Australian government is now awash with money. For decades, there have been steady cuts in Australia’s modest aid budget to “make room” for other spending priorities. However, now, in the time of COVID-19, it seems there are no constraints on government spending. In the current fiscal year (2020-21), government spending has jumped by almost 20 percent. The budget deficit has blown out to a remarkable $160 billion. Yet within this incredible spending spree, there is still no room to even maintain the sad level of Australian aid.

For another thing, this latest cut fits into a miserable history of cuts to Australian aid. The history extends back by close on 50 years.

The gold standard for aid targets in OECD countries is 0.7 percent of GNI (gross national income). This standard was set by the international Pearson Commission Report in 1969. In Australia, political leaders from both the Labor and the Liberal Party signed onto this target in the 1970s. They regularly talked about their commitments throughout the 1980s.

There was nothing casual about these commitments. There is a long record of Australian political leaders and parties paying lip service to the 0.7 percent target. Malcolm Fraser as prime minister, Andrew Peacock as foreign minister, Gough Whitlam from the Labor Party, and repeated policy statements in Labor Party platforms, all spoke of the goal of achieving the goal. More recently, in 1996, Alexander Downer as foreign minister referred to the Howard Government’s support for the UN aid goal of providing 0.7 percent of GNP.

Throughout all of this, the ratio of national spending on Australian aid kept falling.

The target of 0.7 percent is now history. But the game of setting fictitious targets did not come to an end when politicians stopped talking about them. In May 2007, as an election loomed, Alexander Downer spoke of the government’s plan “to double aid by 2010.”  In 2008, the new Rudd Labor government talked of a goal of 0.5 percent of GNI. And the references to the 0.5 percent target continued to be endorsed by the Liberal Party shadow minister for foreign affairs, Julie Bishop, in the lead-up to the 2013 election.

In the event, when the Liberal Party won government in September 2013, foreign minister Julie Bishop quickly delivered double blows to the aid program. One of the first decisions of the incoming Abbott government was to abolish the aid agency, AusAID, and to force its absorption into the Department of Foreign Affairs and Trade. This change, effectively, destroyed the professionalism of the Australian aid program. 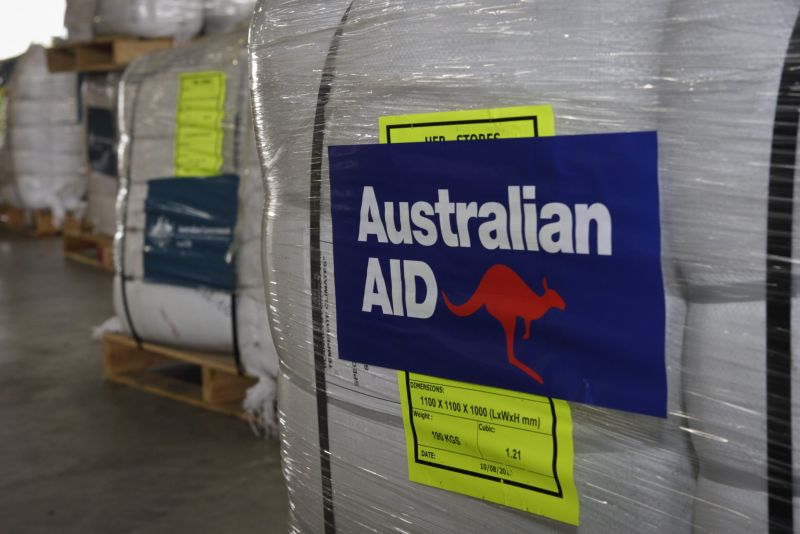 Pallets of AusAID materials prepared for delivery to Fiji in the aftermath of Cyclone Winston - December 19, 2012. Image credit: DFAT, Flickr.

Soon after, in 2014, large cuts in the aid budget were announced. The result was that the Australian aid to GNI ratio dropped below 0.25 percent, the lowest level that it had sunk to. The ratio has recently fallen further.  It currently hovers around 0.22 percent and seems likely to continue to decline.

Does any of this matter? Perhaps not, depending on your view. The answer depends on what you think aid is for. One major problem is that the goals of the Australian aid program have always been confused.  It is hardly surprising that Australian voters are sceptical about the value of aid when the objectives are fuzzy.

The idealistic view of aid draws support from the NGO lobby, which emphasises humanitarian objectives and talks of the need for Australia to be “generous” at the international level. However, these well-meaning ideas carry very little weight at the political level.

A more hard-headed view points to the need for an expanding aid program to bolster Australia’s security role in the Indo-Pacific region. One former Director General of the now-defunct AusAID often talked of aid as “the soft end of the defence vote”.

What Australia now needs — and what we do not have — is a modern and professional aid program designed both to tackle non-traditional security threats at the international level and to build Australia’s economic links with Asia.

It seems remarkable, given the lessons from COVID-19, that the Government does not give higher priority to an aid program to strengthen Australia’s role in the region. Instead, the Australian aid program is being slowly squeezed into irrelevance. The result is that our capacity to protect our interests in Asia is diminished. This is what happens when a nation becomes a hermit state.