China appears to have passed the worst of COVID-19 and is several weeks ahead of the global transmission curve and economic recovery trajectory.

COVID-19 has been a global black swan event and put China on the back foot, struggling to cope with the management and control of a virus outbreak that had extensive impact on all elements of Chinese society and the economy.

China’s COVID-19 outbreak has had a huge and tragic human toll, as is the case in many nations across the world. Despite the controversy about China’s role and handling of the pandemic during this period, official figures suggest its actions to control it have been highly effective   and reprieved the nation from the large transmission and fatalities experienced by countries such as the US and Italy.

Early indications of a virus outbreak surfaced on the last day of 2019, with China’s Municipal Health Commission reported a cluster of pneumonia cases in Wuhan, Hubei Province. A novel coronavirus was eventually identified, although it would take until 22 January for the World Health Organisation (WHO) to recognise the risk of human-to-human transmission of the virus. As the spread, severity and level of inaction grew, the WHO eventually declared a pandemic on 11 March.

China’s prevention measures were strict, abrupt and at massive scale in the initial stages of local transmission, despite delaying the reporting of cases to WHO. On 23 January, Hubei Province was placed in immediate lockdown, with air and rail departures halted, and the lives of 56 million people suspended indefinitely. The entire nation underwent similar border closures and movement restrictions before the first overseas death was recorded in the Philippines on 2 February.

Controlling the outbreak was an immense feat amidst the world’s largest annual migration for the Lunar New Year beginning on 25 January. Over 3 billion domestic trips were interrupted as families sought to return home across the nation, a dangerously complex situation amidst the virus outbreak. 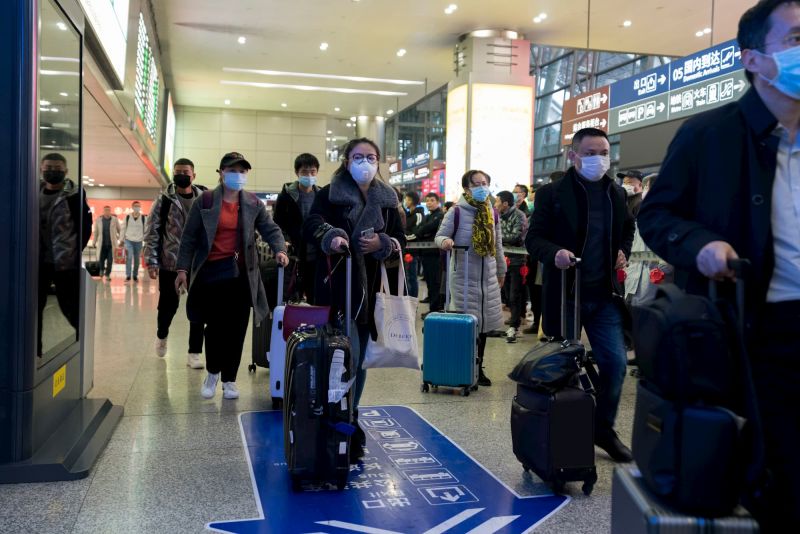 Since then, China has had 84,404 total confirmed cases and 4,643 confirmed deaths. These figures include a retrospective increase of 50 percent on 17 April, as China admitted to only reporting cases in Wuhan that were confirmed by genetic testing, as well as the likelihood that people died before a positive test was conducted.

On 5 May, there were only four new confirmed cases and no deaths, continuing a downward rate of infection. China has reported to now have less than 1000 total active cases and zero hospitalized cases in Wuhan, the original epicenter, where a 76-day lockdown ended on 8 April.

While recent sporadic local transmission has seen regional clusters emerge in Harbin, capital city of Heilongjiang province and Guangzhou, capital city of Guangdong, the aggregate level of transmission continues to fall as restrictions ease and the economy and daily lives return to normal.

Controlling the pandemic – how effective has China been?

China’s firm and fast actions to curtail and control the virus has been a colossal effort spanning China’s vast 1.4 billion population. In many respects, it is a feat only China and the Chinese Communist Party (CCP) could implement through its centralized one-party government.

There are differing perspectives on how the CCP and President Xi Jinping handled the outbreak. There has been wide condemnation from the international community about the lack of transparency and the early stage cover up by local Wuhan authorities, both of which impacted the development and spread of the virus locally and globally. Recent announcements of dramatic increases in Wuhan COVID-19 fatality numbers by 1,290, increasing numbers by 50 percent have only intensified calls for an inquiry into the handling of the virus.

China’s approach centered on central government leadership, coordinated localised implementation of measures and mass scale social license. Implementation of virus control and population movement control at provincial, municipal, city, township, village, street committee and apartment block level were effective measures during a critical period in the pandemic’s development in February 2020. Sackings of local officials and a purge of provincial CCP figures has consolidated Xi’s accountability. His tour of Zhejiang was a public statement that China was emerging with economic clout and even stronger centralised authority.

The wider-reaching political impacts of the crisis will become clearer during China’s annual ‘Two Sessions’ meeting of the National People’s Congress on the 22 May. This will be an important marker of a return to normalcy, a ‘new normal’, and is essential for the nation to assess its growth targets and major policy initiatives.

Many of the successful elements of China’s pandemic control through local total quarantine and more widespread lock down have been used and adapted by nations in the global fight against the pandemic. China’s ability to move rapidly placed it in good stead to fight the virus.

During early stages of the outbreak, China quickly sequenced the virus to be used for domestic vaccine development, and its fast action and turnaround in distributing key medical equipment to Wuhan and other parts of the country placed it well to fight the virus. Digital technologies were quickly and effectively leveraged to support efficient sharing of health information and the ability for the country and economy to gradually open up again, supported by a health passport based QR system, verifying COVID-19 status.

A combination of factors enabled China to overcome the worst of the pandemic and position control of new transmissions and outbreaks. Mission completed? Not quite, but China is already claiming “victory” over the virus.

China’s economy has experienced significant adverse shocks due to economic lockdown. During the first quarter of 2020, the economy contracted by 6.8 per cent – the first negative growth rate since 1976. Despite this historic contraction, Asia’s markets closed in the green following this announcement as investors were buoyed by signs of tepid recovery.

China reported its March PMI as 52.0, a small expansion from record lows in February. One business activity index is measuring overall business utilization at 82.8 percent compared to ‘normal’ pre-outbreak levels. These announcements imply that the return to base level of operations was quick but full production will be unattainable in the short-term.

Chinese businesses have been heavily impacted, with many either going out of business or having to streamline to remain viable. On 13 March, the China Enterprise Confederation (CEC) announced results of their survey of the performance of 299 large manufacturers. One-third of the companies were SOEs and the remainder were from the private sector. In the first quarter, over 95 percent of companies reported a revenue drop, 97 percent reported a decline in profits and 80 percent suffered an increase in operational costs. Clearly, the scale of economic hardship is reflected in the widespread concern that many companies will not survive without a significant second quarter performance rebound. Economic and social stability are top of the government’s agenda, and its economic stimulus and support packages are focused on supporting business sector activity and driving demand that was hardest hit by the lockdown.

China’s fiscal stimulus so far tops RMB 2.6 trillion or 2.5 percent of GDP. Approximately half has already been implemented for epidemic prevention and control, production of medical equipment, disbursement of unemployment insurance and tax relief. Local government bonds for public health emergency management have been lifted to 1.3 percent of GDP.

The People’s Bank of China has sought to safeguard the market against increased volatility. It has introduced liquidity injections via open market operations (RMB 3.27 trillion), re-lending expansions (RMB 1.8 trillion) and credit extensions (RMB 350 billion). Banks’ reserve requirement ratio also has been cut by 50-100 basis points to free up lending to SMEs.

There are green shoots emerging across the consumer economy and industry sectors as the economy slowly moves back into motion.  According to Professor Jane Golley, Director of the ANU’s Australian Centre on China in the World, even modest growth expectations are predicting China’s economy could increase output by US$313 billion in 2020.

China’s international relations at a time of global crisis

On 4 April, the Chinese people stood together at 10 am to mourn the ‘martyrs’ of the crisis and publicly recognise the country’s swift recovery. Almost immediately, China’s leaders pivoted to public diplomacy overseas, airlifting 30 tons of medical supplies to Italy when the nation’s calls for help to the European Union went unanswered. Branded by Xi as a new ‘Health Silk Road’, China is stepping up its bilateral foreign aid presence.

This post-COVID 19 shift is China’s effort to be a good global citizen in providing moral and material support across the globe. To many this appears as reconfiguring the arrangements of global power. In a humanitarian sense, while many nations welcome the much-needed assistance at a time of need, much of the Western commentary criticises Beijing’s ‘mask diplomacy’ and actions of goodwill construed with disingenuous intention.  Despite some criticism over countries being billed for substandard COVID-19 test kits and protective equipment, the diplomacy appears to have been effective in overcoming some of the initial bad press China received, especially among neighbors in Southeast Asia.

Many of China’s actions on the domestic and international stage have been viewed as highly controversial. Growing calls from the US, Europe and others in the international community question and condemn China’s action or inaction and levels of transparency during the outbreak. Many have emphasised the risk of heavily global and China-centric trade and supply chains, calling for diversification. This is not just a China issue, as nations come to grips with risk mitigation approaches to global supply chains and the implications on their critical sectors and product categories such as key medical supplies. Anti-China sentiment has swelled in the coronavirus panic, with allegations of state collusion and a ‘China-centric WHO’, and more devastating is the Anti-Chinese sentiment impacting Chinese and Asian diaspora.

Closer to home, Australia has called for an international review to consider how the virus spread and evaluate the efficacy of control measures. If not directly targeted at China’s proposed mismanagement, it is another setback to the diplomatic relations between the two nations as China pushes back against the international probe. Relations are close to reaching an all-time low, but now more than ever we need to constructively work with China to address the mutual issues we face. The broader question remains of Australia’s economic interdependence on China. Trade decoupling and diversification cannot occur overnight, and any realignment of global supply chains needs to recognise China’s enormous pull factors. These demand-pull drivers are essential to the prosperity of Australia’s export, tourism and education sectors. Our bilateral and trade relationship with China is acutely important given our COVID-19 economic realities. Never more so than now.

While the COVID-19 pandemic is still unfolding globally, efforts are shifting towards easing restrictions and opening damaged economies. As nations reflect and dissect the management of this devastating pandemic, attention will fall sharply on China. Focus will be on its perceived or real role in the pandemic’s spread spanning its initial handling of disease origin and eventual control. The differing political ideologies, global economic impacts, supply chain interdependence factors and eroding levels of political trust in China make for a complex set of issues to address.

The immense achievements of the Chinese government and its people in overcoming this phase of the pandemic cannot be understated but will unfortunately be drowned out by much negative discourse. To move into a positive new reality, balanced and pragmatic dialogue and common economic social and political solutions will be integral to a constructive shared future.

Nick Henderson is Director of the China Practice at Asialink Business.
Michael Hester, a Bachelor of Arts student interning at Asialink, contributed to this article.