The release of Australia’s latest strategic update and defence acquisition plan has highlighted the growing risks and shorter warning times of conflict in the Indo-Pacific. Defence observer Mark Dodd asks whether Australia has made the right decision with its biggest-ever defence purchase—the $80 billion submarine— for the uncertain and potentially dangerous times ahead.

The Morrison government's plans to bolster military spending—a response to rising security tensions in the Indo-Pacific region in a post-coronavirus world—is a timely opportunity to reassess the biggest defence purchase in our history, the $80 billion future submarine contract.

Geopolitical challenges in the region drove the government to announce last week, in its 2020 Strategic Update and Force Structure Plan, a big boost to naval warfare capability, including the purchase of long range anti-ship missiles.

But, amid rising costs and lengthening delays in projected delivery, it was a missed opportunity to reconsider the wisdom of the current contract with France's Naval Group to acquire the new Attack-class submarine.

In his address to launch the Update, Prime Minister Scott Morrison spoke of the priority the government attached to shaping Australia’s strategic environment. The government could have made a valuable contribution to that objective by resurrecting a deal that was all but signed six years ago to acquire 12 off-the-shelf Japanese Soryu class submarines.

There would be a penalty—at least $400 million—but a decision to return to the Japanese solution would have deepened a strategic alignment of growing importance to Australia, ensured the Navy received timely access to the latest proven submarine technologies, and returned billions of dollars in savings to the taxpayer.  Perhaps it is still not too late for a prime minister acknowledged for his pragmatic instincts.

The story behind the submarine procurement reveals a litany of false signals and shifting judgments that are likely to hamper both the consolidation of strategic ties with Tokyo and the development of a suitable submarine capability to replace the Collins class.

In 2014, the Abbott Government was moving to buy the Japanese Soryu class submarine. It was so confident a deal would be signed that a media release was prepared to formally announce what would have been a high-water mark in bilateral defence ties with Japan.

It was put on hold due to push back by senior Liberals warning of an electoral black eye in South Australia, which had been promised construction rights. Further delays in deciding on a preferred submarine stemmed from the Liberal party leadership turmoil that led to Abbott's ousting. It is my argument that the conflation of conflicting political, industry and defence priorities resulted in none of them being very well served.

In 2014, Soryu offered the best value for money and the fastest delivery schedule. On a visit to Japan that year, former defence minister David Johnston received advice from senior Japan Maritime Self Defence Force (JMSDF) officials that 12 Soryu Class submarines made in Japan would cost about $20 billion with the first two boats delivered within 18 months of contract signing and then one a year rolling off a mature assembly line, quite a contrast with the current delivery timeline in the early 2030s.

While Tokyo was coy about advance publicity flagging a Soryu submarine sale, one senior defence source familiar with the Australian sales push recalled that behind the scenes Ambassador Bruce Miller, one of the Department of Foreign Affairs and Trade’s foremost Japan experts believed the deal was going ahead.

The government of Prime Minister Abe Shinzo was unquestionably keen for its first significant foreign military sale. That was underlined when on a 2014 official visit to Japan, Johnston, became the first non-Japanese politician to be allowed aboard a Soryu submarine. I understand that the US, which would provide the submarine's combat system, supported a successful Japanese bid for what was known as project SEA-1000 in part because it would have enhanced trilateral naval interoperability. In 2014, the US had quietly flagged the desirability of a Japanese boat to house its $1.4 billion AN/BYG-1 combat system. 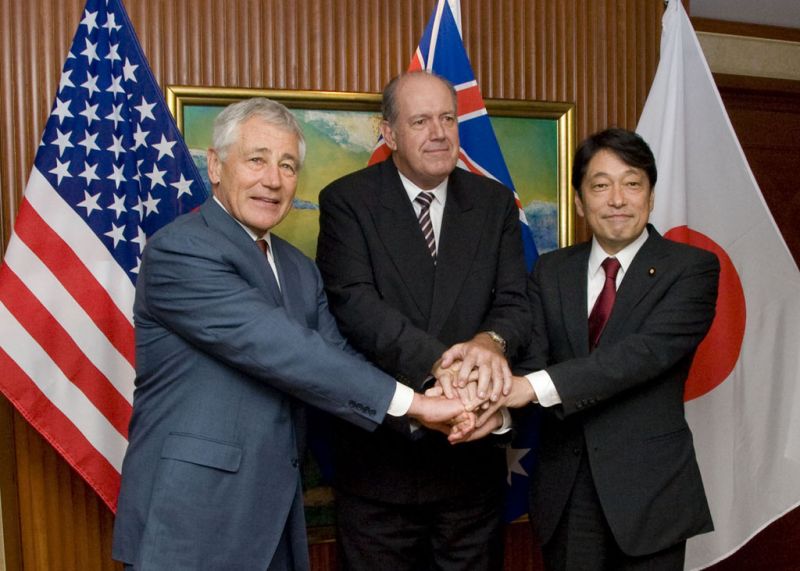 Johnston too was an enthusiastic supporter of the made-in-Japan option, and submarine technology was on the agenda in April 2014 at a dinner in Perth with visiting Japanese Defence Minister, Isunori Onodera. During the dinner, Johnston expressed a keen interest in Australia acquiring the cutting-edge propulsion system for the 4200 tonne Soryu class.

Talk of Japanese defence efficiencies were not only confined to technological innovation. There was a comedic exchange when Minister Onadera revealed about 20,000 civilian officials managed Japan's 250,000-strong defence force, about the same number employed in Australia to look after the needs of 55,000 uniformed Australian Defence Force (ADF) personnel.

Over coming weeks, the case to buy Soryu continued to build momentum with Johnston emphasising to ABC's Lyndal Curtis during one tricky radio interview on 30 July, that the federal government supported local shipbuilding “but not at any cost,” a message reiterated the following month by the Australian Financial Review's John Kerin in an 'exclusive' story that Japan's Soryu was now firming as the favored submarine contender. Johnston would again use the cost benefits imperative of buying Japanese during a September visit to the Mulwala munitions factory in Victoria.

In 2014, value for money was the standard refrain from the defence minister when questioned about naval shipbuilding or a possible Japanese submarine purchase—words approved by the Prime Minister's Office media team—and an indicator that plans to go with Japan were supported at the time at the highest level of government.

Factoring in Royal Australian Navy design requirements, the $80 billion cost for 12 French Barracuda submarines stands in contrast not only to the cost of the Japanese boat but to the $1.4 billion price tag for three Type 209/1400 Nagapasa (Chang Bogo Class) class diesel-electric attack submarines on order for the Indonesian Navy. A South Korean license built variant of the German 209 Submarine, with a range of 11,000 nautical miles and a 50-day endurance, the type is a multi-purpose platform capable of conducting anti-surface warfare, anti-submarine warfare and special forces missions.

While SEA-1000 was always going to be hotly contested, the Abbott government’s interest in acquiring the Japanese submarine was no flash-in-the-pan moment. For several months, a senior adviser to Johnston promoted a “softening up” campaign of backgrounding and 'leaks' to selected defence and political journalists in the Canberra press gallery promoting Japan's Soryu submarine as a low-risk option ahead of two other prime contenders, Naval Group of France and German firm Thyssen Krupp Marine Systems (TKMS). A third Swedish bid based on a revamped Kockums design had been quietly ruled out.

The arguments to go with Soryu were and remain compelling. But in essence they are cost, capability and schedule, three key determinants for any defence purchase whether field rations or high-end hardware. In short, does the product come within budget, deliver its promised capability and will it arrive on schedule?

As for schedule, the Japanese proposal offered another big advantage over its rivals. The conventionally powered Soryu was an operational submarine, in service with the JMSDF unlike the other boats, including the tender winning Shortfin Barracuda Block 1A, based on a French Barracuda nuclear-powered submarine, which as of December 2019 was still in the Preliminary Design Definition phase. Construction of the first RAN submarine is not expected to begin until 2022-23 with the boat scheduled to enter service 10 years later.

An Australian Audit Office report in January found there are already delays in two key design milestones, which will add to a blow out in projected costs. Delays matter from a strategic standpoint too. According to the latest Defence Strategic Update, Australia can no longer count on the assumption of a 10-year strategic warning time for major conventional attack, eroding our ability to “gradually adjust military capability and preparedness”. In the best-case, the first French boat enters service in another 12 years with the completion date for the final vessel likely to be in the 2050s.

Although buying off-the-shelf would reduce the level of Australian naval shipbuilding, Japan was prepared to agree to an assembly and fit-out deal in Adelaide. The 2016 White Paper states a preference to “maximise Australian industry involvement”, unlike the 2009 and 2013 Defence White Papers, which prescribed the new submarines be assembled in South Australia.

It would require political courage to scrap the French submarine deal. But the advantages are clear.  Billions of dollars would be returned to the taxpayer if the government selects Japan's Soryu, a 4200-tonne boat which will more than adequately meet the 2016 Defence White Paper requirements for 12 “regionally superior” conventional submarines. The financial penalty to be paid would be less than the $1.4 billion cost of cancelling the acquisition of the Super Seasprite helicopter in 2008.

For too long, politicians from both sides have adopted the mantra that Australia is part of Asia. The prime minister has added the logical corollary that we should endeavour to enhance our security by working with others to shape the strategic environment.

The submarine contract offered us a great opportunity to invest in those ideas by buying from a close friend and our most important regional security partner. Acquiring the Soryu Class submarine would deepen our current strong security ties, achieve even greater levels of interoperability between the ADF and JSDF, while enhancing and underpinning both countries long term strategic and economic interests at a time of great uncertainty in our region.

Mark Dodd was senior media adviser to the former minister for defence David Johnston in 2014-15 and a Canberra-based foreign affairs and defence correspondent for The Australian. He holds a masters degree in special operations and irregular warfare from the Australian Defence Force Academy, University of NSW.