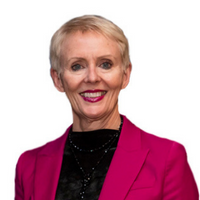 Martine is an experienced executive within the government, nonprofit and international policy sectors with expertise in public policy development, formulation and promotion in Australia and internationally.

Martine was previously the CEO of the Committee for Melbourne, beginning in March 2016. Before her time with the Committee, Martine was CEO of the Australia China Business Council (ACBC), where she led the development of the organisation’s national strategy.

Prior to her role at the ACBC, Martine was De puty Director of the Lowy Institute for International Policy, where she led the organisation’s business and organisational development. As SecretaryGeneral of the Australian Red Cross (ARC) from 2001 based at its national headquarters in Melbourne, 2004, she worked on a national transformation strategy to help the ARC improve its delivery of community and relief services across Australia and globally.

Martine was a senior Australian diplomat for 17 years and an adviser to Foreign Minister Evans from 1992 t o 1994. S

Martine commenced her position as Asialink Group CEO in March 2022.